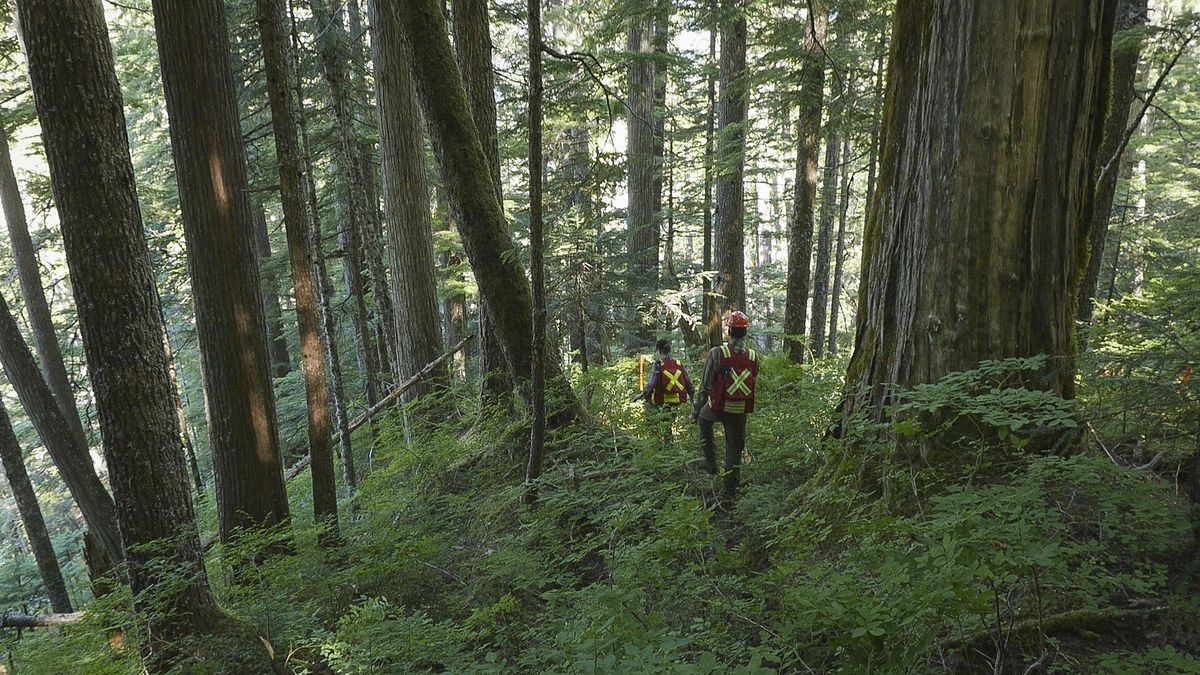 Thirty years ago, surveyors from a logging company began mapping the H’kusam Forest on northern Vancouver Island. In an area where commercial forestry had already reduced many once vast forest stands to remnants, local First Nations have stepped in to protect the site, where they have traditionally harvested materials for clothing, medicine, canoes, totems and houses.

Now the Na̲nwaḵolas Council, representing four First Nations, has signed an agreement with logging company Western Forest Products that will temporarily protect 2,500 hectares of rare and important old-growth forest, including H’kusam. This is the first such agreement under the BC government’s recently announced plan to suspend logging in 2.6 million hectares of old-growth forest.

But logging will continue under the pact, outside areas designated for protection, and the conflict over what remains of BC’s ancient woodlands will persist.

The deal was announced last week, while elsewhere in British Columbia protesters demanding an end to all ancient logging in the province held rolling roadblocks – the latest tactic in a dispute that has led to more than 1,000 arrests since last spring.

Na̲nwaḵolas council members have spent decades fighting to protect ancient forests, including H’kusam, but council chairman Dallas Smith acknowledged that last week’s agreement is unlikely to reduce the temperature of the conflict over logging.

“This time the only people we’re looking to please is ourselves,” said Smith, a veteran of the 2016 Great Bear Rainforest Agreement, which protected a swath of forest on the coast of British Columbia.

“Our nations have just been preparing for that day when they can say, this is what is socially acceptable for us, these are the cultural values ​​that are important to us, and this is also where the economy is. integrity, so that we can gain jobs and economic benefits.

The deal was made under the BC government’s logging deferral plan, which the province announced in November. The plan calls for the temporary cessation of logging in designated areas of the province, while longer-term stewardship plans are negotiated.

BC pledges to save old trees from new logging

The deferral process is not straightforward. Under its legal commitments to Indigenous consultation, the province left it up to First Nations to decide how the new regime would work on the ground. There are 204 First Nations in British Columbia and each has been asked to respond within 30 days to proposed deferrals in their territories. So far, 161 have responded to the province, and most simply said they needed more time.

The Na̲nwaḵola were the first to walk out the door with an agreement only because they spent years working with the forest industry to reach the same kinds of stewardship agreements that are now on the table. The postponements corresponded to their plans.

Many details of the pact between the board and Western Forest Products will be worked out over the next two years. Deferrals ensure significant stands of trees will not be felled during negotiations. Smith said the final agreement could provide member First Nations with revenue sharing, employment contracts or even a stake in the logging enterprise. Part of the deal will allow the sale of carbon credits, which could allow nations to enjoy the land without logging.

The deal may be a template for further deferrals under the province’s old growth strategy, but it also underscores the time it takes to get deals done.

The Na̲nwaḵola were part of the Great Bear Rainforest Agreement, which promised to protect 85% of coastal temperate rainforest on the central coast of British Columbia – the largest such rainforest on the planet. When this agreement was signed, the Na̲nwaḵola turned their attention to their traditional territories on Vancouver Island, which were not included in this conservation agreement.

The H’kusam forest is only part of the deferrals in the council’s agreement with Western Forest Products, but it is an essential part. The council has identified about 200 trees in the forest that are culturally modified, meaning that indigenous people have harvested planks or bark from them over time without killing them. And H’kusam is where young Na̲nwaḵolas learn traditional forest management.

Successive logging companies have applied for logging permits at H’kusam, despite First Nations objections. “Over the years, we’ve almost come to blows.” said Mr. Smith. “It’s beautiful. It’s magical. Once you get out of the car, hit the trail and get to the area, you feel that difference. It’s a rainforest. The trees are huge – they’re everywhere. The sounds are different, the air is different.

In November, Katrine Conroy, British Columbia’s Minister of Forests, announced with some urgency the province’s old-growth carryover plan. His government had made election commitments to protect old-growth forests. But, at the time of the announcement, the ministry had made little progress and frustration was mounting. Environmental organizations have accused the government of delaying action as ancient forests continue to decline for profit. Mass arrests have taken place in Fairy Creek, where protesters are still trying to shut down an active logging operation.

Of the 2.6 million hectares to be temporarily protected, old-growth logging has stopped only on Na̲nwaḵola lands and 600,000 hectares of land managed by the province through BC Timber Sales , a government agency. There is still a lot of work to do.

“Our forests are renewable, but some forests are special and must be preserved for future generations,” Ms Conroy told a news conference last week. “This is part of our government’s new vision for forestry, where we take better care of our oldest and oldest forests, where indigenous peoples are our full partners, and where sustainable forest management and workers and communities benefit from safe and innovative forestry jobs for years. to come.”

The province has pledged support to workers, communities and First Nations to offset the economic impacts of implementing the promised new regime for managing old-growth forests. An announcement is expected in the coming weeks with details on programs to support forestry workers and communities over the next three years.

While the logging industry has opposed the postponement plan, saying it will cause major job losses and disruption, Shannon Janzen, chief forester of Western Forest Products, said the agreement with the council Na̲nwaḵolas would not be catastrophic for the communities the company operates. in.

“Through our work with Nanwakolas, including extensive pre-existing agreements and specific, predictable processes for planning and approvals, we believe we can mitigate potential short-term disruptions to business, while ensuring priority areas identified by Nanwakolas are carried forward over a two-year period,” she said.

Mr. Smith added that the agreement was an improvement over the Great Bear Rainforest Agreement because this time, Indigenous communities were part of the solution from the start.

“I go back to the experience our nations had in the Great Bear Rainforest, where we saw NGOs and industry fighting for our backyard while we were on the sidelines and not participating. not really into this discussion,” he said. “And I’m proud to say that over the years, through this discussion, we have developed the capacity to understand what we need, what our communities need. We have values ​​that must be protected.

“And at the same time, we are embracing a pace that will ensure that we can minimize the economic impacts that affect not only our communities, but surrounding communities and our neighbors in Campbell River, Port McNeill, etc. So it’s a very carefully thought out, aboriginal-focused approach. »

Novak Djokovic may not be a role model, but does he want to be one?