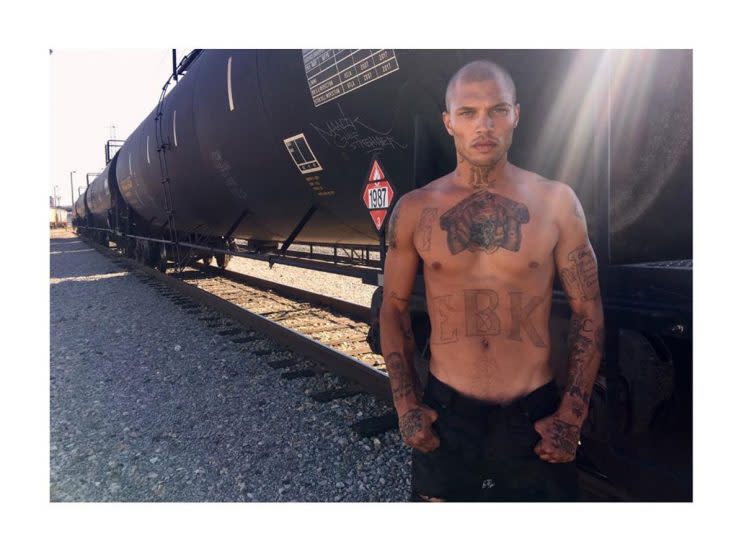 You know you’ve been successful in the fashion industry when you scored a private meeting with French editor and style superpower Carine Roitfeld. And that’s exactly what happens in the life of Jeremy Meeks. Yes, the mug-shot model, the handsome man with light blue eyes and tons of tattoos who was arrested in 2014 and wowed the world with his stunning mug shot.

On Monday, he made his New York Fashion Week debut – walking the Philipp Plein runway show – he also met Roitfeld, who wasn’t afraid to be kissed by the shirtless hunk.

Meeks posted the same photo, with the caption: “It was great meeting you and your team @carineroitfeld, can’t wait to see you soon.”

We don’t know how they’re going to work together, but it might have something to do with Plein’s show. According to W magazine, Roitfeld helped launch the collection, which features an interesting range of “models” including Fall Out Boy’s Fetty Wap, Desiigner and Pete Wentz.

Since its release, Meeks has starred in major advertising campaigns for brands such as Givenchy, Gucci, Dolce & Gabbana, Tom Ford and Hugo Boss.

Meeks has slowly made his way into the fashion world since his release from prison in March 2016 after serving over a year, and Roitfeld isn’t the only fashion icon he’s met. Meeks, who signed with White Cross Management, spent time with Anwar Hadid – Gigi and Bella’s younger brother – over the summer.

The reunions and shows that Meeks has booked in just under a year since his release are what most models have worked decades to achieve, so we can’t imagine what he’ll do next – a shoot. Balmain, maybe?