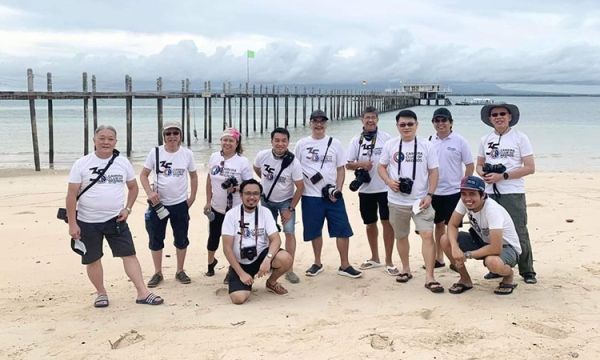 The Russian model got her natural feel from the nature-filled view of Lakawon Island Resort in Cadiz Viejo, Cadiz City. (Photo by Negro Camera Club)

The Camera Club of Negros (CCN) has launched its first fashion shoot for 2022 with Russian model Tatiana as the subject.

After being dormant for two years due to the coronavirus disease (Covid-19) pandemic, these Negrense shutter bugs have given their artistic juices to shoot with a professional model who came to Negros Occidental for the photoshoot held at Lakawon Beach Resort at Cadiz Viejo in Cadiz on February 21.

This was a first Camera Club of Negros club shoot for the 2022 fashion photography of Russian model Tatiana, in collaboration with GET SPOTTED by Emgee Po, and Lakawon Island Resorts.

Nicky Ledesma, former chair of the SCC and longtime photo club member, said this is the first of many activities their group is looking to undertake as the world returns to normal.

Ledesma said he also ensured that all participants were fully vaccinated and that safety protocols were followed.

“We are looking to join the club shoot with my CCN family in the coming months. Drone photo credits by John Kimwell Laluma and the rest of the photos by Daryl Jimenea and Thur Yap,” he said.

Tanya Gonzales of Lakawon Beach Resort sponsored the club boat ride, resort and Tawhai floating bar, admission and lunch, and use of the resort’s speedboat to return to Cadiz Viejo.

They also thank the couple Emgee and Daryl Jimenea who came with their team, who did the makeup and others who made the photoshoot a success.

“We thank the Lord for giving us perfect weather all day except when we got home and the rains came. It made the boat ride back fun, a wet and wild experience,” Gonzales said.

This club activity ushers in other exciting activities for the Camera Club of Negros led by Renzi Juarez, club president, and the new leaders for 2022.

More filming is planned, including exhibits that have been stalled for two years.

A fashion and portrait shoot with the Camera Club of Negros featuring model Tatiana was made possible through the collaborative efforts of Emgee Po Jimenea and her husband Daryl, Camera Club of Negros, Pie Ionah Pion’s HMU, from a stylist Emgee Po / Styledbyemgee and clothing provided by Get Spotted.

For the CCN, Nicky Ledesma shares the creation of the camera club which began in 1981.

Architect Antonio Corral invited Billy Lopue to start a new photo club to spark the love of photography in the province. The Negros Camera Club, of which the architect Corral was a member, had already been dormant for many years.

Members of the original Negros Camera Club included Leonito Lopue, brother of Billy, Antonio Corral and many others. Its most prominent member, Bo Villanueva, also belonged to the Camera Club of the Philippines. The club through them had already awakened an enthusiasm for the profession in the province. But for some reason he had become inactive. A new photo club was therefore ripe for the launch.

With the formation of a new photography club, the Camera Club of Negros was born.

Attorney Alex Mirano and Billy helped register the club with the Security and Exchange Commission on July 16, 1983.

CCN, as our club was known, was involved in supporting the initial establishment of the House of Negros (now Negros Producers) by assisting them with product shots for their display presentations.

The club also became involved in documenting illegal logging activities in Don Salvador Benedicto on the initiative of Art Valdez (the leader of Mount Everest) who was then working for Roberto S. Benedicto during the Marcos era. . It was our first project to raise social awareness in people and was printed in local and national newspapers.

Years later, the Camera Club of Negros held its first major photo exhibition of scenic spots in Negros. The place of this was the old airport. It was set up in partnership with the Direction du Tourisme.

Nude photography as an art was also introduced by this Negros club for the first time.

Today, several years after the creation of the club, a new generation of photographers has emerged to maintain the passion for photography. Their enthusiasm for this endeavor and their innate artistry not only support the clubs goal of promoting photography as a craft, but also to expand its membership base while maintaining the quality standards it has maintained ever since. his foundation, Ledesma shared.*

The beginnings of a smart city model