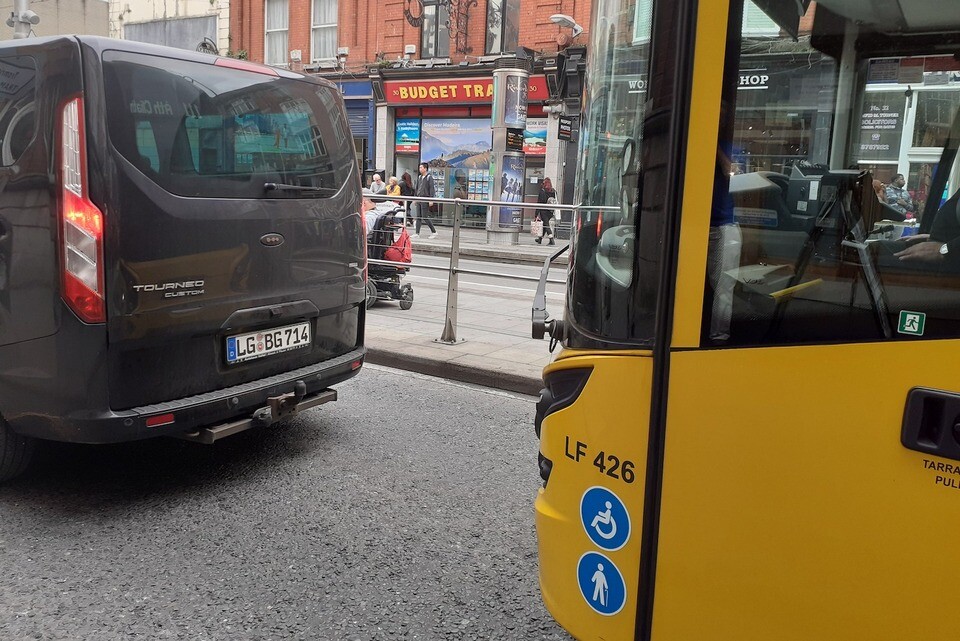 Selected as a model by the Minister, the transport service for disabled people closes for lack of funding

Padhraic Dormer says he would call Accessibility Community Transport Southside (ACTS) between five and seven times a month before it ended a few weeks ago.

He used it for trips from his home in Rathfarnham to the cinema, Ballyfermot Gym, sporting events, or perhaps meeting friends in pubs like Baker’s Corner.

The drivers were friendly and reliable, he says. “They would drive you home and even make sure you got in safely.”

“There is no other company like ACTS that offers door-to-door service,” he says. “If I go out for a night out, I call other businesses and they can’t accommodate me.”

ACTS had been running its community bus service – serving people with disabilities, mobility impairments and sensory issues – in the south end of the city for 20 years, said ACTS board member Geraldine Greydon.

The news September 9 that it ends means many people will be left without transport in this part of Dublin. On average, the company made about 550 trips a week, she said. Before Covid, it was 1,100 trips, Greydon says.

“It’s absolutely devastating,” she said. “It’s a service that has worked for 21 years, and it has worked very well.”

In its official statement, the ACTS board said it had tried to make the funding it had available work. “But, unfortunately, the time has now run out and the company is currently unable to pay its debts.”

The Department for Equality did not respond to questions sent on Monday asking whether it intends to increase funding for community transport services.

Covid had a big impact on ACTS’ business operations, but the company also had growing problems, says Greydon.

“Our business model is outdated and we need to restructure it, but our service model is perfect. ACTS is door-to-door on demand,” she said.

ACTS is not the only community transport service in Dublin which says it is in financial difficulty and needs more state support.

Community transport services like ACTS and LDAG are funded by the Community Services Program (CSP), which is run by Pobal, a government agency that provides support services to social inclusion groups, on behalf of the Department of Rural Development and community.

But that’s not enough to cover costs, Collumb says, so LDAG is always trying to cut costs or find ways to make money.

LDAG runs disability support services like note-taking to bring in money to subsidize its buses, but, since 2016, larger for-profit health organizations have also started offering these services, Collumb says.

The solution is not to raise bus fares because passengers can’t afford it, he says.

Currently, LDAG gets Pobal funding to pay its staff €17 or €18 per hour, says Collumb.

It struggles to recruit and retain staff because it cannot offer as much as other companies, he says.

“We require people to have a full driving license with no penalty points. There aren’t many people looking for jobs right now, not with our pay rates,” he says.

LDAG used to run an evening bus service, to take passengers to concerts or events with friends, but they had to drop it as they weren’t getting enough bookings to make it financially worthwhile viable, says Collumb.

The evening service costs LDAG €200 so that there is a driver available all evening, he specifies. “It’s not viable. We should subsidize that by making money in other areas.

ACTS was considering expanding its services to do lifts for the over-65s and hire wheelchair vans, she said.

“We would need a capital injection,” she says. They also need to modernize their fleet of buses, as it was a big expense to keep repairing them.

Anne Rabbitte, Minister Delegate for Disabilities at the Ministry of Health said to the Dáil on February 16 that a working group examine a plan for transportation supports for people with disabilities to get to workplaces and employment supports.

It was part of the National Disability Inclusion Strategy (NDIS) 2017-2021which refers to plans to revise transport media and develop a coordinated plan.

The Department for Equality, one of the agencies responsible for this, did not respond to questions sent on Monday as to the next steps of the NDIS and the latest meeting of the working group.

During the Dáil debate in February, Rabbitte praised ACTS: “We have to learn a lesson from this group, based in South Dublin. It is an integration model.

She also said during the debate about seven months ago that ACTS was not funded enough.

“More investment is needed. It’s a model of rural connection in an urban setting that we have to consider in determining how to create that level of engagement,” she said.

During the same debate, Richard Boyd Barrett, a People Before Profit TD for Dún Laoghaire, said he met with ACTS on the same day.

ACTS needed €53,000 immediately or it would close, he said. “I understood that he had met the Minister of State. The last time I heard was today, there had been no response.

Greydon says ACTS never heard anything after that government debate. “Other things have become priorities. This group is very marginal.

ACTS was fundraising at malls to cover costs, he said.

Boyd Barrett said during the debate that the government should fund community services as part of the public transport network. It could do so under the free pass scheme, where people with disabilities get free access to public transport, he said.

The Government Mobility Allowance, an income-based transport payment for people with reduced mobility, has been removed in 2013and the government said it was design a diagram to replace him.

Collumb says the closure of ACTS has him concerned that people who relied on the service will find themselves isolated.

Public transport is often difficult to use for people with disabilities, he says. Rail lifts break up frequently and wheelchair users must call 24 hours in advance to reserve a ramp. Dublin Bus ramps may not work or the wheelchair space is already occupied, Collumb.

Nowadays, booking a taxi, especially in the eveningcan be difficult, says Collumb, but especially challenging if you’re limited to wheelchair-accessible taxis.

All of these things mean that people with disabilities face a barrier and they might be less likely to leave their homes for anything other than essential travel, Collumb says. “If it turns into a bad experience once or twice, you won’t go again.”

Urban community transport services should be fully funded, he says, because without them some people with disabilities might not be able to leave their homes.

“You’re denied a service, you’re denied out, which usually brings up other issues like depression,” he says.

People become isolated and don’t want to go out after a while, he says. “It harms your health and all that.”