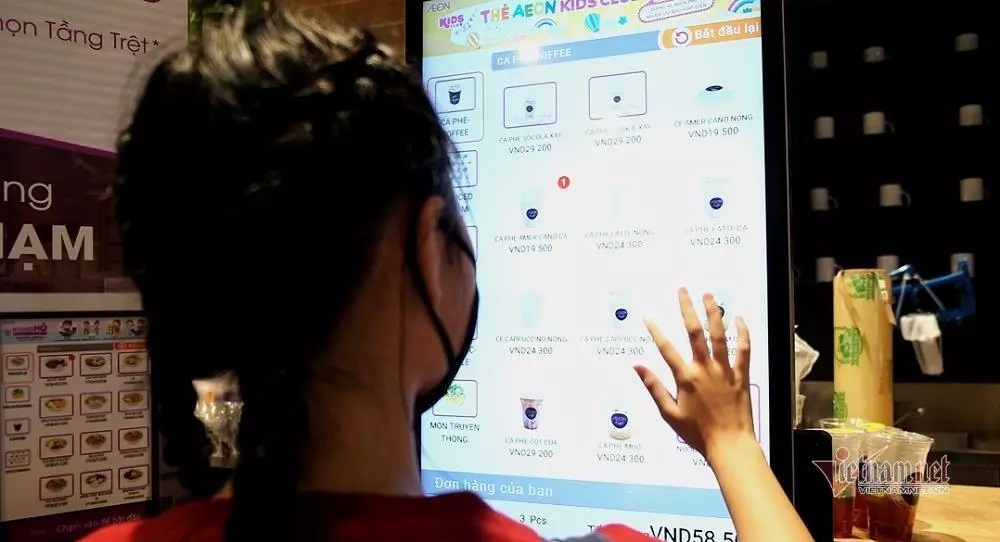 The beginnings of a smart city model

A robot enters a kitchen and a few minutes later brings drinks to the guests. Many forms of contactless payment and transactions are slowly coming to life. And, beyond that, there is the formation of smart cities.

One morning in November 2021, Tran An left her home at 7 a.m. and called at a newly opened coffee shop in District 7 of HCM City on her way to work. No staff appeared except for a robot approaching An’s table. He used his smartphone to scan the QR code on the robot’s body. The drink list was shown and he chose the dish and placed the order on the phone screen. Immediately the kitchen staff received the order and started making the drink. The robot entered the kitchen and a few minutes later brought the drink to An.

“I was surprised the first time I saw the robot here. It was very convenient. Limiting face-to-face communication is a good way to keep customers and employees safe,” An said. .

Ms Thanh Mai from District 4 said it was convenient to pay for drinks through e-wallets after she saw the cafe owner’s phone number printed on a table.

A representative of the robot supplier, Mr. Nguyen Van Tien, Director of TD – My Nam Nguyen Company, said that artificial intelligence robots have recently appeared in the Vietnamese market. The automation device can replace 2-4 employees with simple tasks.

The cafe is able to save on staff training costs and reduce the number of waiters. The robot can also transport used glasses and plates on trays, transferring them to the washing area.

The robot has a sensor, so when it encounters an obstacle, it will stop, make a warning sound and find another way to move. In the future, the robot can be installed with Vietnamese voice interaction software to guide customers to an empty table. This type of robot costs between 100 and 300 million VND/unit depending on the model and the technological characteristics.

Coffee serving robots are a method used in combination with cashless payments, creating conveniences for service users. In 2021, many distribution systems have entered the race for cashless payments.

At the Aeon Tan Phu supermarket in Tan Phu district, Ho Chi Minh City, Ms Minh Phuong checked the prices of goods, displayed on the screen after staff scanned the barcode. She opened her smartphone to pay via the e-wallet QR code, completing the purchase process in about a minute. Behind her, people waited to pay with their smartphones in hand.

A representative of the supermarket said that in the third quarter of 2021, the rate of customers using the cashless payment method increased significantly compared to the previous period. In a supermarket of this system in Hanoi, almost 50% of the total transactions were cashless in August 2021. This company aims to have mainly cashless payments.

During the pandemic, housewives visiting G-Market selected food through electronic screens outside the store. Employees inside received orders, packed and delivered goods to the conveyor belt. Customers could pay through e-wallets, without person-to-person communication.

According to the State Bank of Vietnam, non-cash payments through all channels during the period January-November 2021 reached a high growth rate, in particular a 49.3% increase in the number of transactions. and 31.34% of the value of transactions over the same period in 2020. for the Internet channel; up 74.64% and 86.58% respectively for the mobile channel; and up 50.36% and 130.97% respectively for the QR code channel.

These are optimistic signs, but it does not stop at the number of non-cash payments in the country. It’s just a branch of big data. To go further, the smart city model is a solution that must aim to maintain the investments of international companies in the country in the digital age.

While previous models of globalization largely revolved around the trade of labor-intensive tangible goods between countries, the globalization of the new period revolves around the provision of integrated and intangible digital services to businesses and to individuals. This trend can be described as “digital globalization”.

The relationship between new digital business models and international trade occurs when new business models are based on IT and instant information sharing. These flows of information help organizations and individuals establish new business, financial and social links locally, regionally, nationally and internationally. All of these links can help trading partners increase the volume of trade.

“Competition between countries and cities around the world is increasing day by day. Therefore, international investors will consider new factors when choosing to invest, including the degree of digitalization of the destination, the degree of sustainability of the economy, and the social nature of the surrounding environment. They will influence investment decisions more than traditional factors, such as low-cost labor, abundant resources and large population size,” Dr Atay said.

According to the development program of some high-tech industries of the Ministry of Industry and Trade, Vietnam has implemented more than 100 smart city projects. From late 2020 to September 2021, at least 28 projects were auctioned. Most projects are in Hanoi (20%), Ho Chi Minh City (30%) and Da Nang (24%). The rest (26%) is in the provinces of Quang Ninh, Bac Ninh, Binh Duong and Can Tho.

Da Nang has won the Smart City Award Vietnam 2021, the second time this central city has been honored with this award.

So far, 41 of the 63 provinces and cities run by central Vietnam have developed smart city projects at different scales.

One of the major “side effects” of the COVID-19 pandemic, amid the unprecedented toll it has taken, is that it has catalyzed digital transformation across all industries, especially financial services. .