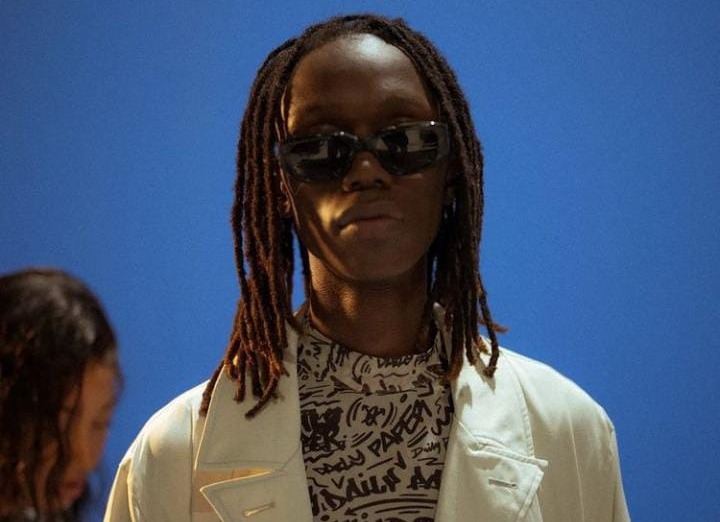 One of those Jacks whose talents reflect the definition of perfection is Victor Kasiga alias Vidu who is both a singer and an international model.

Born and raised in Nairobi, Kenya, Victor moved to Dar es Salaam when he was 16 years old. His journey through both careers began a year later, in 2017, when he moved to the UK for studies.

Staying with his cousin during the summer holidays, who is also a musician, Victor developed an interest in music

“I lived in Manchester at the time for about seven months pursuing a career in professional football, but my head and my heart were in the art. I didn’t know anyone who was making music at the time. So seeing him do it and do it well made me more curious about making music myself.

Back in Dar es Salaam, Vidu started browsing YouTube videos looking for beats to write about.

“I quickly made a friend who had recording equipment and did my first song, ‘Two Years Old.’ I always take the time to find the right rhythm to rap, this led me to create my own rhythms on an iPad using GarageBand”, he detailed.

It was mainly for experimentation although he shares that after doing another project and titled it “Untitled by Louis ViDu”, “Since then it has been a journey of learning about creating and interpretation of the music,” says Vidu.

The name Louis came with a fashion journey, Vidu started modeling for his friends in their personal projects. After a few gigs, he then contacted fashion companies, including UK-based Sampaix.

“I worked with Sampaix for a few months and my time there led me to work more with other local and freelance photographers. When I came back to Dar es Salaam, I continued to work with photographers and freelance agencies for the purpose of building my portfolio to show potential modeling agencies,” he recalls.

He further reveals “After graduating from high school at the Haven of Peace Academy, I left Dar es Salaam for Canada to pursue a bachelor’s degree in Media and Design at the University of I also signed with another model agency named Angie’s Models and Talent.International (AMTI) but i barely worked because of the corona pandemic.i moved again and transferred to amsterdam at Vrije University where i signed with another modeling agency I currently work with called “The Movement Models” Rolling out his second career, the 22-year-old details that seeing how dedicated Bayo was to music, he started liking her a bit more.

His proudest moment in music is when he was composing the song “Summer Blues” from his debut album titled “Love & Violence” which was released on July 2, 2021.

“That moment was fun and spontaneous. My favorite part of the song is the melody at the end of the song which was recorded by my friend Olema. It’s my most played song on Soundcloud and Spotify,” he explains. he.

His latest project, “Love & Violence”, is about a person growing up and falling in love. The album contains seven songs including Alive, Killed Bill, Sunday Morning, Shotgun, Sweet Pain and No Girl, No Cry.

“There are so many feelings that come with young love and sometimes those feelings are contradictory. I made this album because I wanted to share my experience of broken hearts and the spirit of fighting to fall in love again because it’s a universal language that people can identify with,” he says.

Victor says that between the two, fashion is more of a career than music because he still feels like a beginner in the latter.

Her love for modeling was inspired by fashion shows. From an early age, he would watch them on YouTube and he was amazed at how different clothing designs conveyed different stories by aligning with the models wearing them.

“I see fashion shows as short films and stories that unfold through clothes that are showcased. To be a model is to become the medium that brings those clothes to life. Without the model, the clothes are emotionless and can’t perform their function. I wanted to be part of the stories that clothes can tell. Over time, I became interested in the whole industry rather than modeling alone, so I became a model because it It’s like a back door in the industry,” explains Victor.

“Modeling looks very glamorous on the outside, but there’s more to it. I love it as a career because I can study the designs of the clothes I wear for different brands. “I also got to meet people from the creative industry. As a media and design student, modeling is like fieldwork for my coursework,” he explains.

He remembers the first time he participated in a fashion show. Victor says it was at Swahili Fashion Week 2018 and he was chosen as a performer for his friend’s brand named Kahvara.

“It was nerve wracking because it was my first time playing in front of a lot of people. However, I calmed down after the audience felt familiar and when I decided to be more present and to focus on what I was supposed to do,” he recalls.

Of all his proudest fashion moments, Victor remembers the first shoot in Amsterdam with Daily Paper for their spring and summer 22 collection.

“Despite the fact that I loved their vision and their work, I felt honored to do this work so early in my career,” he explains.

At the end of June this year, Victor was cast for a show in Paris for a brand called Reese Cooper. He hints that it was a dream come true to be part of the show.

“I was thrilled to be one of the models at Paris Fashion Week because those shows were what inspired me when I was younger. It was a dream because I had been working on myself for a while. prepare for such moments and it felt good to have this moment. I also felt like it was a good start for my career,” he says.